Anmelden Registrieren
Aktuelles
Country Flags
Welcome back Gast think about enabling your country flag to let everyone know where you are based. Click on your username " Gast " or avatar at the top right of the screen and then 'Country Flag Select' pick your flag from the list. If your flag is not there then reach out...
The Grenadier Forum
Register a free account today, you'll be able to post, access to the Technical section of the site, access the classified ads, and participate in group buys as well as other benefits. If you are an INEOS Agent/Dealer please contact admin@theineosforum.com for a commercial account. Unsolicited sales by any 3rd party are strictly against the terms and conditions of the forum. If you wish to be a registered vendor or partner then please contact admin@theineosforum.com for further information.
Sie verwenden einen veralteten Browser. Es ist möglich, dass diese oder andere Websites nicht korrekt angezeigt werden.
Sie sollten ein Upgrade durchführen oder einen alternativen Browser verwenden.

Hi All and Ineos

Now we have our build dates and some will be with us soon, as in october, not to far away really. will there be a chance to test drive or even sit in a Grenadier for customers.

Have any uk dates or places been assigned yet.

Appologies if this question is already on here somewhere.

Ive spoken to a few dealers, who have said they hope to get test drive vehicles in the summer, presumably July onwards when Hambach fires up properly
S

I hope they give us a chance to test drive them before finalising stuff, it would seem only fair tbh as we have put our faith in them by ordering so at the very least they should afford us the chance to test drive one.  Getting a signature before we are allowed to even sit in the drivers seat (in my case) would be a little worrying. I have been in one for a drive but only from a front seat passenger aspect, which is probably like a lot of us. a little more reassuringly I haven’t really heard any of the press saying it was dreadful to drive or didn’t feel great etc. I know ASPW said there was a slight offset with the peddles but not sure that will be the final version or not
M

Yes thanks
I just feel its not long till paper signing on a lot of trust for a lot of money.

I 'Registered My Interest' with my local Ineos dealer in Edinburgh (Grange Motors) via their website and three weeks later they haven't bothered to get in touch yet. I'm a bit dubious about their commitment as they're already a Lamborghini/Rolls Royce/Aston Martin/McClaren/Bentley dealer ?

Hate to think what their hourly service charge rate is ?
A

[QUOTE username=G-Man userid=8989993 postid=1332742658]I 'Registered My Interest' with my local Ineos dealer in Edinburgh (Grange Motors) via their website and three weeks later they haven't bothered to get in touch yet. I'm a bit dubious about their commitment as they're already a Lamborghini/Rolls Royce/Aston Martin/McClaren/Bentley dealer ?

Hate to think what their hourly service charge rate is ?[/QUOTE]

Their IG operation isn't due to start till sometime next month - June.

Their IG operation isn't due to start till sometime next month - June.[/QUOTE]

Unfortunately this is a downside to putting your faith in a new company, nothing is in place. I donât say problem because it clearly it isnât a problem at this time and hopefully never will be.  At present I canât see any of these dealers putting much effort in to the IG because how much money will they be making out of it this month or even next month.  Until they get demonstrators I really canât imagine they will have much interest tbh.

The brands of this dealership don't really suggest a farmer clientage. Perhaps they are mistakenly locating the target audience in the lifestyle scene.
P

[QUOTE username=G-Man userid=8989993 postid=1332742658]I 'Registered My Interest' with my local Ineos dealer in Edinburgh (Grange Motors) via their website and three weeks later they haven't bothered to get in touch yet. I'm a bit dubious about their commitment as they're already a Lamborghini/Rolls Royce/Aston Martin/McClaren/Bentley dealer ?

Hate to think what their hourly service charge rate is ?[/QUOTE]

I popped into see them as was driving past. Turned up in my dirty disco 3 and got a few funny looks and was very quickly approached to see what I wanted! Had a nice chat to one of the sales guys, it is currently a Aston Martin showroom but that is being relocated to another site of thereâs and the Ineos showroom will go into that location in sight hill. They are looking at august for this so seems unlikely to be able to get test drives before having to commit pen to paper for a October delivery! I have not even seen one in the flesh yet so abit nervous to say the least! ??

I thought it important to relay comments from the Head of INEOS for Australia Pacific Region, Justin Hocevar, on the Australian INEO Grenadier Facebook page regarding the next version of the Grenadier for customer review.

Yesterday he confirmed that next version of the Grenadier scheduled for Australia will be the PTO2 to land in late August and available for driving, although unclear if customers can drive it or ride as with the earlier prototype tour. Deduct 6 weeks for shipping to Australia, means the PTO2 should be available in Europe in early/mid July.

Then, the PTO3 will follow (when?) and will be the production-ready vehicle for the final 'Production Try Out' / manufacturing validation phase.

Justin said he thinks the PTO3 version will receive full Type Approval & therefore could in future be sold to customers. So, I assume they will be demo models.

Been told today - by Ineos - that at end of August, we will be able to sit in, not test drive, a mock up. BUT ineos still expects customers to place a firm order in July!
I said it seems wholly unrealistic to expect people to commit to a Â£50K+ car without having seen or driven it, but that is whatâs expected.
O

The video does not fit with other PR from Ineos that no test drives until August/September, or  later.
C

[QUOTE username=Steven userid=9014097 postid=1332988741]The video does not fit with other PR from Ineos that no test drives until August/September, or  later.[/QUOTE]

OK but above we hear it from the horses mouth.

If your suggested dates are correct then they will start customer deliveries before populating dealerships with vehicles. That would be a very odd way of doing things.
S

Nothing against the IG, and yes I have ordered one but the lack of anything resembling a production vehicle before I am expected to sign a contract is already making me start looking at the all new Ford Ranger and Amarok. Whilst I have only seen photos of them I am reassured that I have owned both models, yes they are not this model but I am reassured they will be just as good if not better and likely to be Â£45k instead of Â£65k.

As time goes on I am not sure I am willing to take a leap of faith with such a lot of money hanging in the balance.

G-Man schrieb:
I 'Registered My Interest' with my local Ineos dealer in Edinburgh (Grange Motors) via their website and three weeks later they haven't bothered to get in touch yet. I'm a bit dubious about their commitment as they're already a Lamborghini/Rolls Royce/Aston Martin/McClaren/Bentley dealer ?

Hate to think what their hourly service charge rate is ?
Zum Vergrößern anklicken....

Looks like they are still recruiting... He/she goes to have quite a full I tray when they eventually get in post: 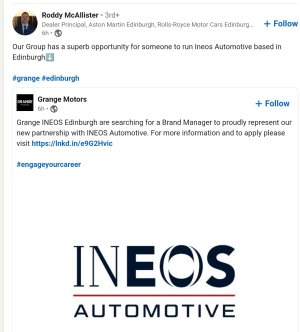