Menu
Log in
Register
Install the app
You are using an out of date browser. It may not display this or other websites correctly.
You should upgrade or use an alternative browser.

Delivery, Service, and Warranty in USA?

Founding Guard
Has anyone heard any updates on how delivery, service, and warranty will be handled in the US?  I'm assuming some sort of partnership with BMW for at least service, considering the engine is BMW and the ZF transmission is heavily used in the BMW lineup.

Staff member
Reservation Holder
It would be great if that were the case, I'm on the west coast, but how amenable BMW would be to that idea I don't know. It does make sense to tag on an existing dealer network. Who knows, maybe they'll be selling them via BMW as well.
C

Founding Guard
I am hoping they will be leaving dealerships behind entirely. From what I've seen in the videos, this thing is SUPER simple, and that bodes well for service, which is half the battle, the other half is parts.

For Parts, they've talked about having an online catalogue with exploded diagrams and free workshop manuals, and the parts are slated to be available to order from their website (along with the car) delivered right to your door. Or, to the door of your local mechanic.

For service, that local mechanic would be key. Every small town in the world has a ragtag shop with a Kawasaki, New Holland, John Deere, and Stihl logo on the side of it. They fix everything in these shops from chainsaws to farm tractors. And, there's no need for XYZ population density to support the small business. I'd love it if I saw the Ineos logo along side all those other ones at these small-town dealerships.

Isn't BMW the car company that actively sued British small business owners (mechanic shops) who had Mini or Land Rover logos on their shops? That doesn't bode well for a "get it fixed anywhere" approach. I have not seen any confirmed statements on this from Ineos, but the "vibe" I've been getting from Ineos would make "get it fixed anywhere" fit a lot better with the brand/intention than "get it fixed at a limited dealer network". Further to that point, outside the major cities in North America, BMW dealers are few and far between. As in, there's 500-1000 kilometres between BMW dealers here in Canada. I don't know what it's like in the states but anecdotally they are not nearly as common as Ford, GM, Chrysler.

That being said perhaps this will be a 'both, and' situation -- no reason (if those involved want to play ball) that they can't partner with BMW for service and parts AND the shade-tree "every town" mechanics as well. 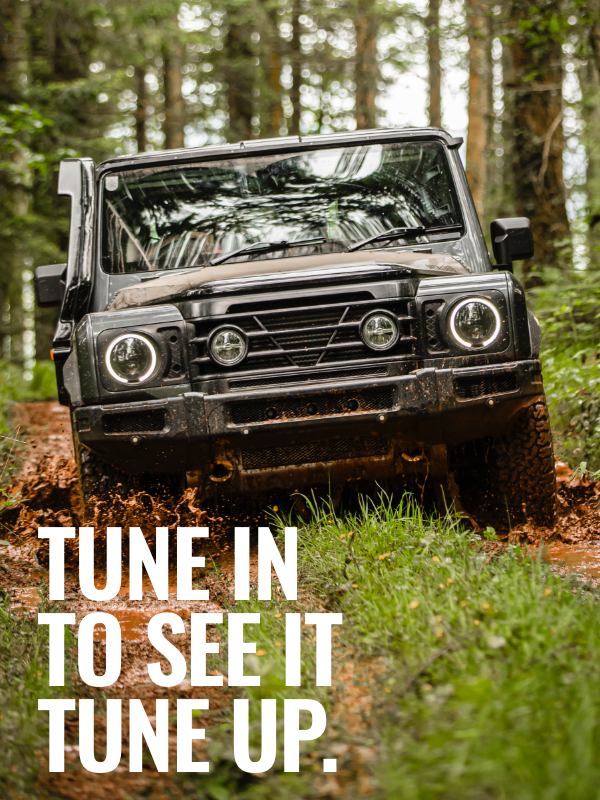 Well it looks like all questions will be answered, but how many new ones will come up.

Either way I can't wait to see what they worked out for the after sales/parts and purchasing.
D

Founding Guard
A buddy and I were just joking that they've been reading our text messages.  Can't wait for more details.

d1rty said:
A buddy and I were just joking that they've been reading our text messages.  Can't wait for more details.
Click to expand...

Well if this forum reaches its critical mass then they would be a bit naive not to check in every now and again. Lotus do on the forum I'm on in the UK so I don't see why these guys wouldn't. Hell even British Airways do on flyertalk!!
C

Founding Guard
All the more reason to promote this dedicated Grenadier space, I say!

@Stu, just a heads up that the link you shared is personalized to you; no harm done on this one but I believe in a few days they are sending out personalized codes and it'd be a shame if they are one-time use and someone scooped yours up!

ChasingOurTrunks said:
All the more reason to promote this dedicated Grenadier space, I say!

@Stu, just a heads up that the link you shared is personalized to you; no harm done on this one but I believe in a few days they are sending out personalized codes and it'd be a shame if they are one-time use and someone scooped yours up!
Click to expand...

Thanks Bud, it would be a shame for someone to snake my reservation invite.

As far as spreading the word on the forum I'm of the opinion the more the merrier, even if there are some trolls, but they get weeded out rather easily.

Ok its Forbes, and they make the mistake of thinking Hambach is in Germany but. they quote that Ineos are hoping for 200 sales and service points in North America (wonder how many in Canada and Mexico, and not just the USA) also that they are trying for most owners to be within an hour of a repair facility. That may be a stretch, but good luck if they can pull it off.

One thing that stuck out at me was the figures that they are trying to attain for roof load albeit static and towing, at 750lbs / 340kg  static and 7k / 3,175kg towing.
D

Stu_Barnes said:
...they make the mistake of thinking Hambach is in Germany....
Click to expand...

Not for nothing, but it's about five miles from being in Germany.  LOL.

Yep, borders there have been rather fluid to say the least.As long as the product is good I don’t really care. It’s sad that they didn’t build a plant in the UK but I can’t blame them really with the whole brexit thing.
Click to expand...

Stu_Barnes said:
Yep, borders there have been rather fluid to say the least. As long as the product is good I don’t really care. It’s sad that they didn’t build a plant in the UK but I can’t blame them really with the whole brexit thing.
Click to expand...

I think it was more about the opportunity than brexit. The hambach plant purchase saved a lot of time, and made more sense  location-wise in regards to suppliers.

Staff member
Reservation Holder
Yep, totally agree, but having the stability of chain of supply in, I'm assuming a single currency would make the accountants very happy.
P

I hope the VP or GM (whatever title he goes by) for North America is following this thread.  There are a lot of valid questions, and even if he did it anonymously he could feed us a lot of information.
I have been developing a list of questions and there's no reason for INEOS to be secretive about the information:
1 -- Why no diesel option for North America, especially since the BMW X5D is available so it should have passed EPA testing already?
2 -- In the configurator, there is the option for 17" and 18" wheels.  Does ordering 18" wheels add to the ground clearance or change the diameter of the brakes?
3 -- Are a long range fuel tank and a 2nd battery going to be offered as options?
4 -- I would love load space dimensions (not cubic feet) with the rear seat up and down?
5 -- Is the rear seat a 50:50 or 60:40 split design?
6 -- Is European delivery an option for a North American vehicle?  (Please say 'Yes')

I understand there's a 2B prototype testing in North America, so why not get the names of the early sign-ups and let us know when and where the vehicle is going to be.  I'd even sign an NDA if that's what they want.
How many of you are here because, in my case, I was profoundly disappointed by the new Defender?  After so many teasers over so long, that was the best Land Rover could do?  I'm sure INEOS would love to know because it's a data point for the number of Grenadiers they could expect to sell in North America.

Thanks for hearing me out...
PL
C

Founding Guard
I don't think it's an issue of being secretive -- I think it's an issue of not yet knowing. Some of those questions are likely answerable, but Ineos' approach to this rig is to have pulled back the curtain on the entire process from day one, and we're still a lot of days away from launch. Typical car companies announce the car AFTER everything is done -- the seats are chosen, it's been emissions and crash tested, etc. Just look at TFL Truck/Car/Offroad's YouTube channel and the lengths that manufacturers go through to camouflage their new vehicles with checkered wraps and skirts!

The Grenadier on the other hand has been transparent since day one in its development. I've watched things go from a suggestion, to a plan, to an announcement, and I suspect that a lot of the questions you have are currently in the "suggestion/plan" stage. For instance the "no diesel" thing might well be because they wanted to, but they couldn't figure out a plan yet to make it viable, so that's the decision they are at today. Tomorrow that decision might change, as they often do in vehicle development. Same thing with options like fuel tanks -- given that Ineos is partnering with Recaro and their ilk for a lot of stuff, they are likely still exploring what's possible in the options department.

Grenadier Ordered
I am in for Euro delivery, especially around Octoberfest 2023.
S

Same. Prost!
You must log in or register to reply here.

Hello from the Mid-Atlantic (Maryland, USA)