Log in Register
What's new
The Grenadier Forum
Register a free account today, you'll be able to post, access to the Technical section of the site, access the classified ads, and participate in group buys as well as other benefits. If you are an INEOS Agent/Dealer please contact admin@theineosforum.com for a commercial account.
You are using an out of date browser. It may not display this or other websites correctly.
You should upgrade or use an alternative browser. 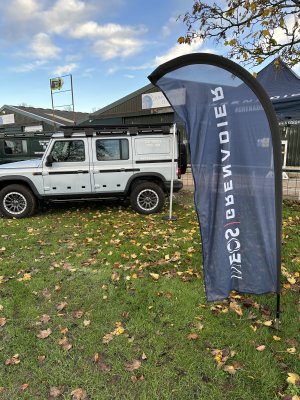 At the show today guys in Newark, test drives available off road !!! Come and ask for Simon if you can get down.

WOW - live 5 miles away and not heard a thing about this! Is the vehicle available to self drive?

Go ask nicely in person … I’m sure you’ll get a good reply. Then resort to begging if you have to
A

Nomad said:
WOW - live 5 miles away and not heard a thing about this! Is the vehicle available to self drive?
Click to expand...

From their FB page: "The day is finally here - you can get behind the wheel of the Grenadier, on the 4x4 track, and put it through its paces!
Sandicliffe INEOS are at the Midlands Machinery Show today (Weds 16th) and tomorrow (Thurs 17th). When you're there, ask at the stand for Simon, who'll sort your test drive out!"

Nomad said:
WOW - live 5 miles away and not heard a thing about this! Is the vehicle available to self drive?
Click to expand...

Stu_Barnes said:
Go ask nicely in person … I’m sure you’ll get a good reply. Then resort to begging if you have to
Click to expand...

No need to beg guys it’s there for you the customers to look around and drive !

SimonTsandicliffe said:
Sure is mate, I’m there tomorrow from 9.30

Hope to see you there!

I was there this morning with a friend and had a drive around the little 4x4 course. 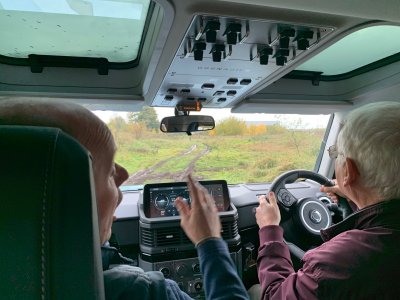 I loved it! This was the second time I have driven a Grenadier and my first experience of the petrol variant.
The vehicle was a PTO2, (Production test build, iteration 2), Petrol N1 with 5 seats, leather, safari windows, compass, extended electrics, steel wheels and K02 tyres, so fairly close to final production but they were strict about no under bonnet shots and would not allow video of the dash while in motion. There were bings and bongs of error messages as the softwear is still not finalised, but I thought the dash and instruments were very promising and the build seemed excellent.

I took a friend who got to drive the Grenadier, which he enjoyed. He is not an off-roader, he used to work for Rover/BMW, so it was rather novel and I was interested to hear his feedback. He was greatly impressed by the build quality and by the power available, but he found the steering a little numb and had some issues with overdriving the vehicle in the ruts. The dash gives the steering angle, so you can see clearly when the wheel is off centre, (the marker on the wheel is also a clue!), so a regular off road driver is likely to give different feedback there.

Once we had got to the offroad site, the minder/driver pressed the off-road button and told us it turned off the seat belt warnings, the parking sensors and changed the dash to include the inclination displays, steering angles and the diff lock settings. 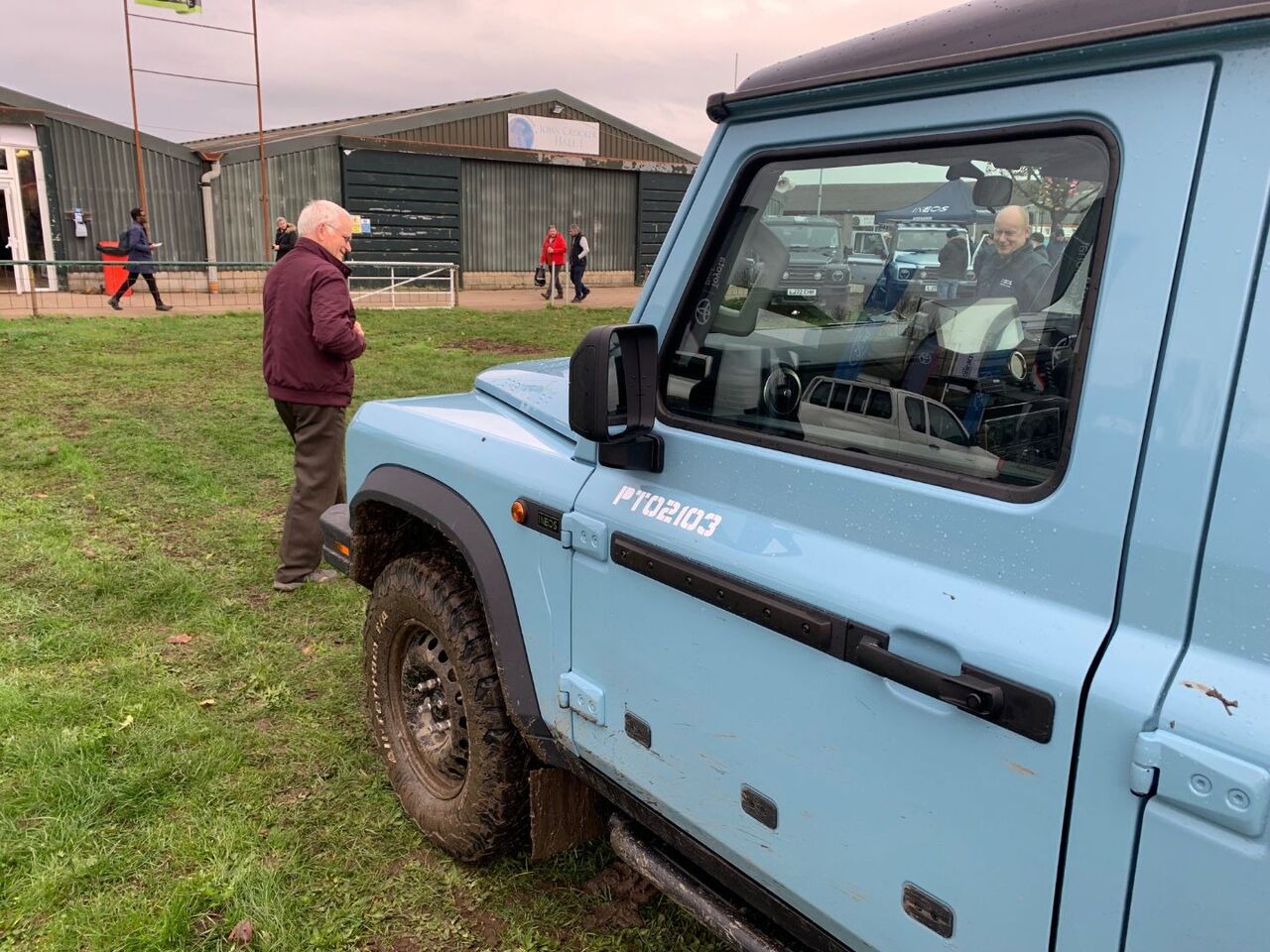 After adding a little but more mud onto the vehicle 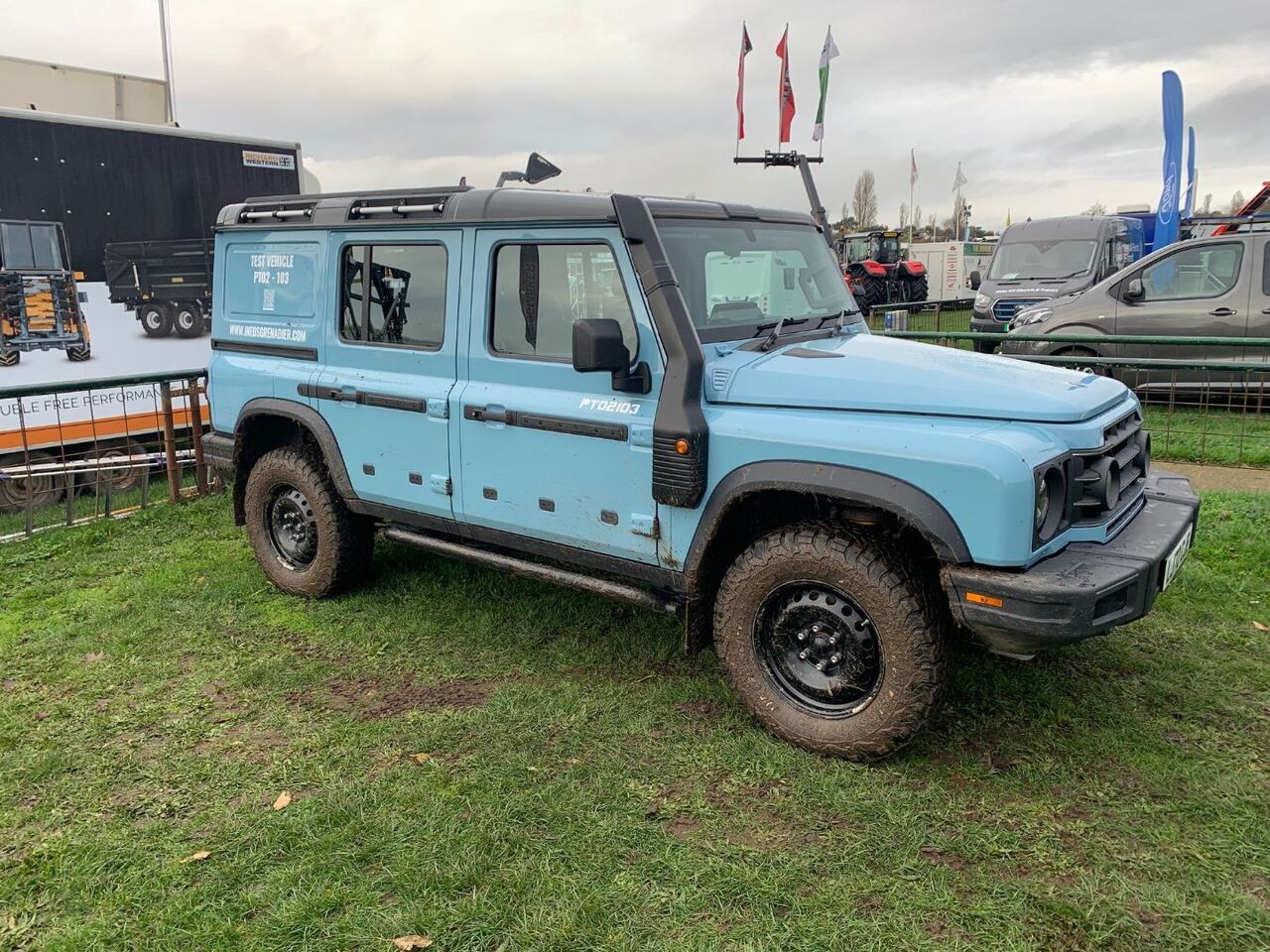 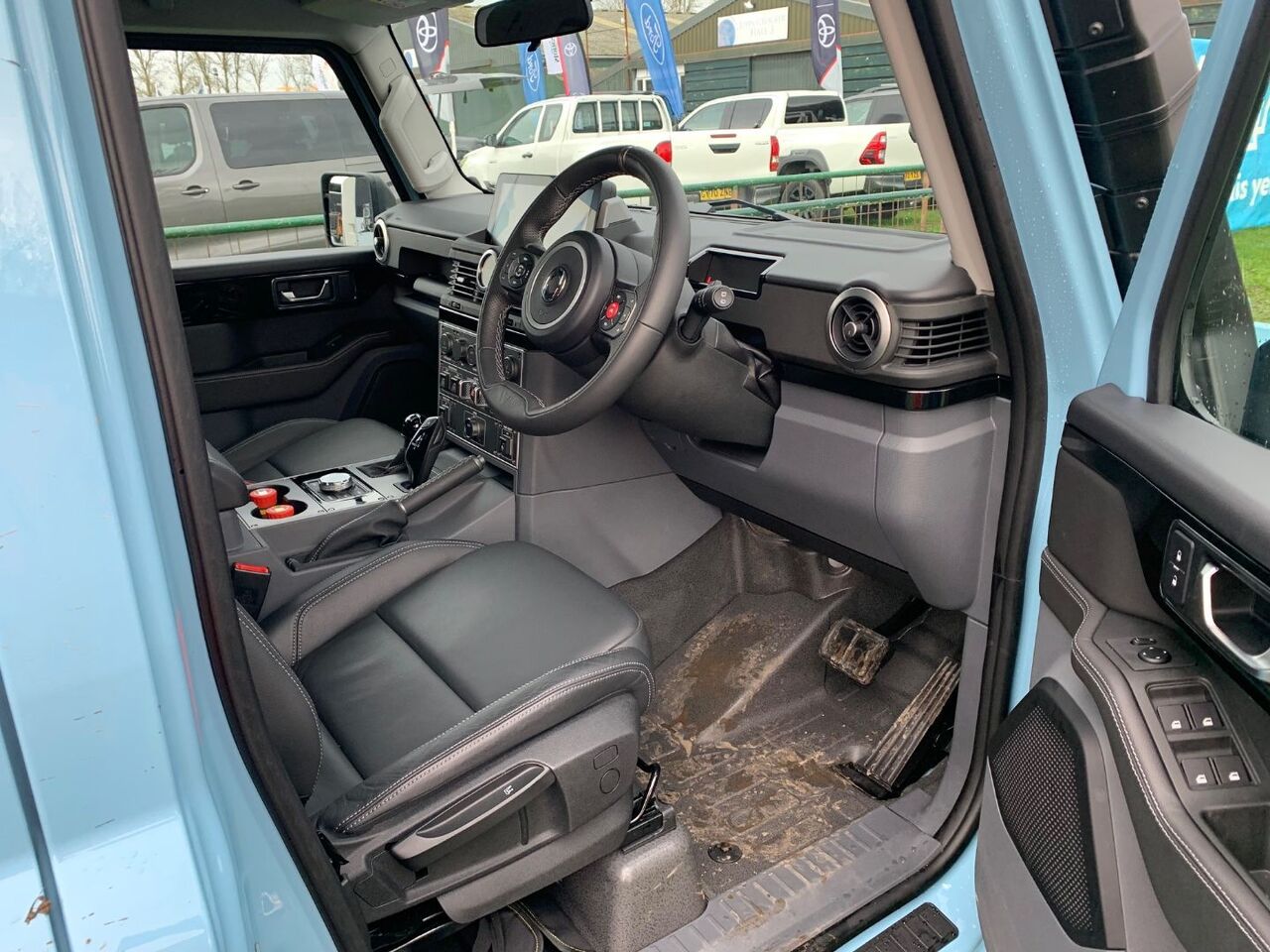 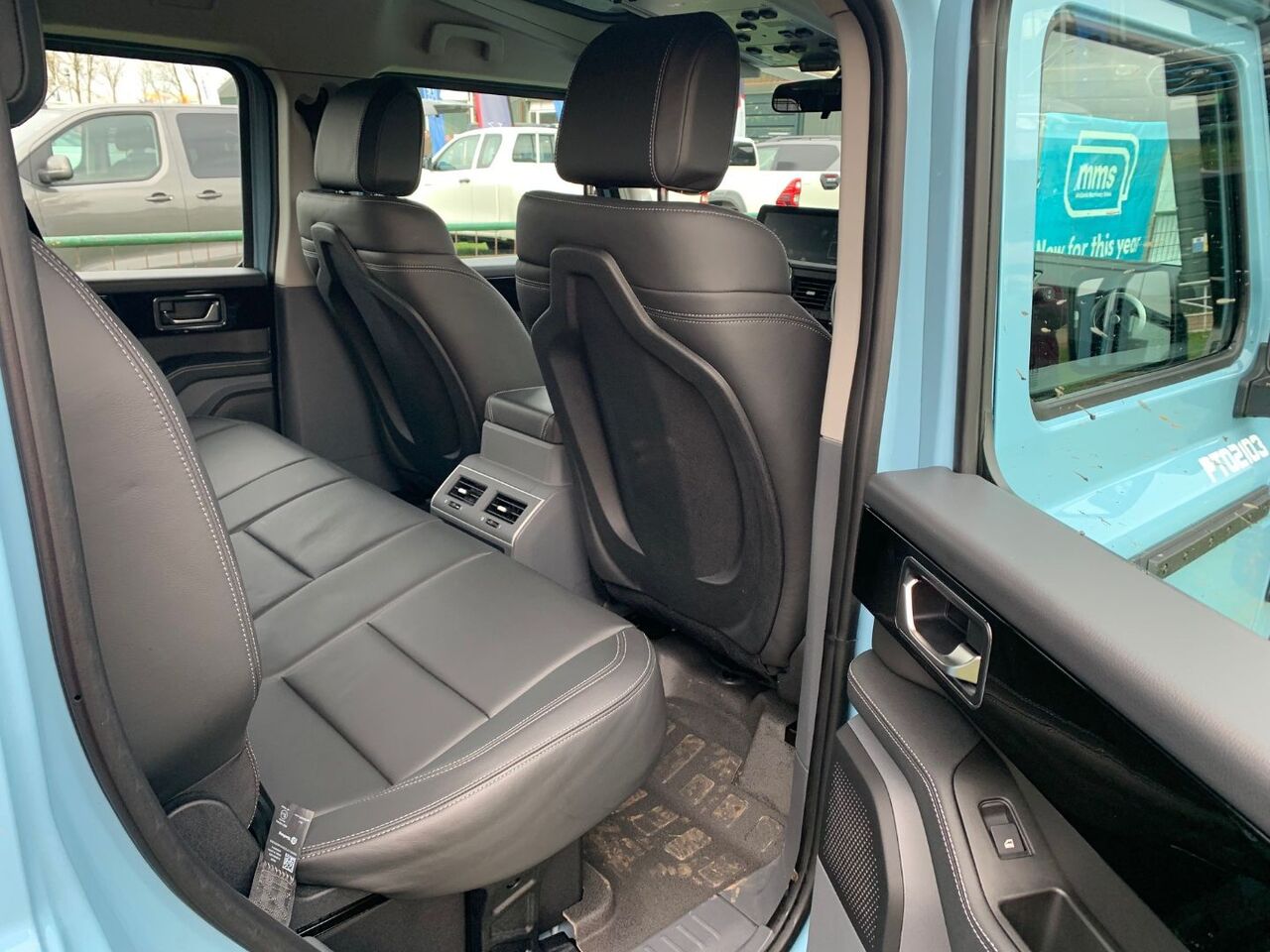 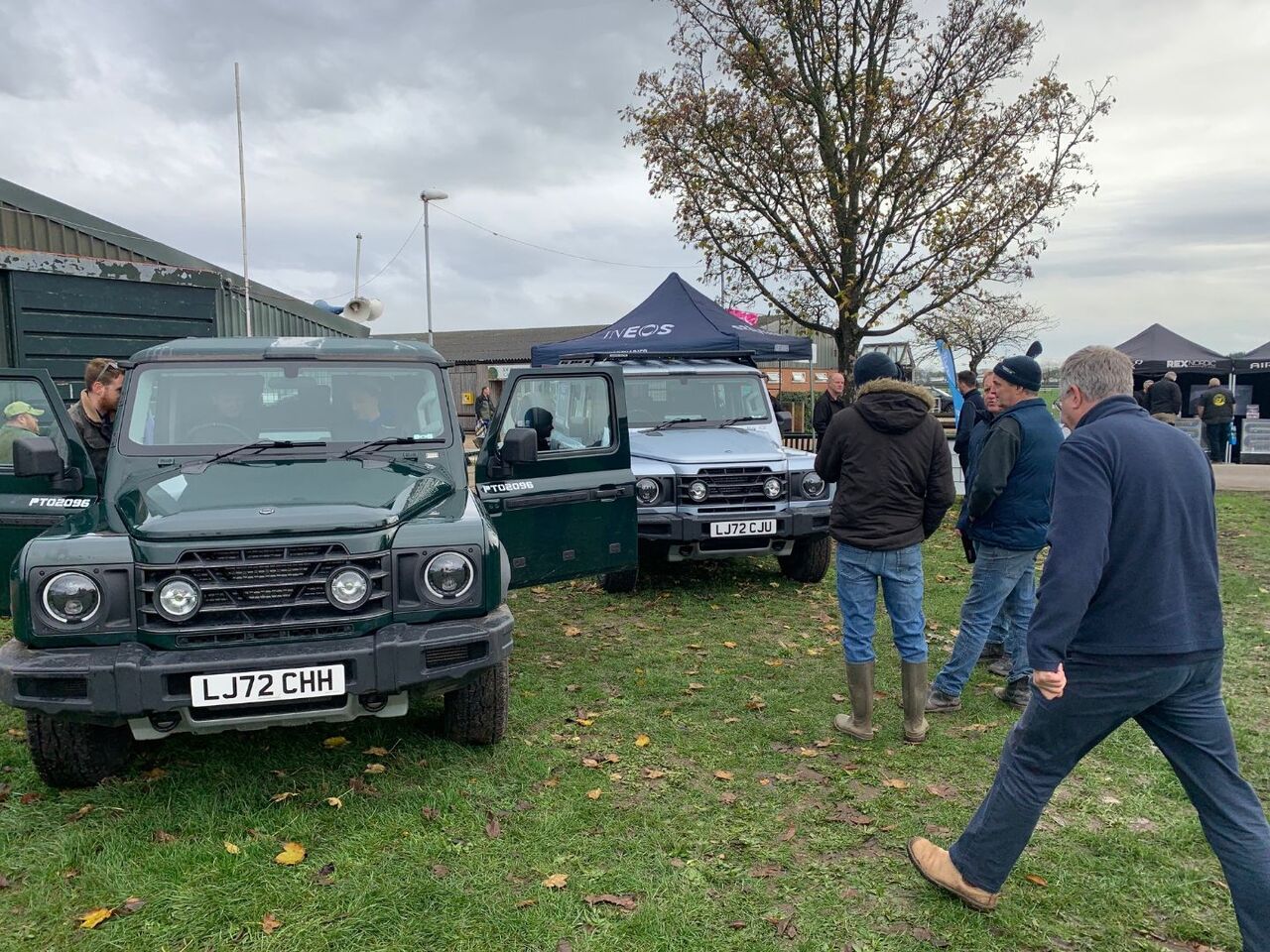 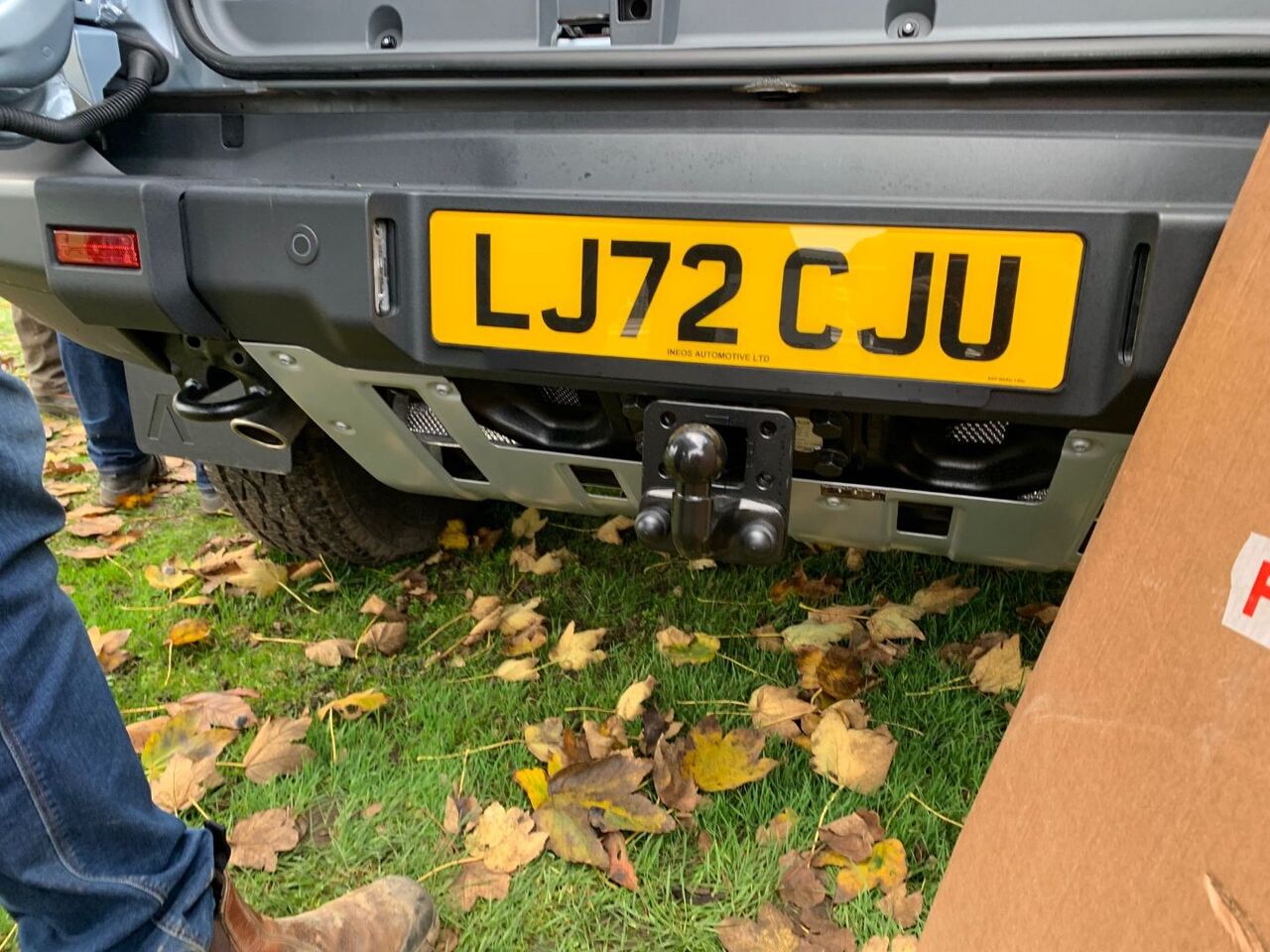 Tow gear, but no idea of the standard electrics fitted. 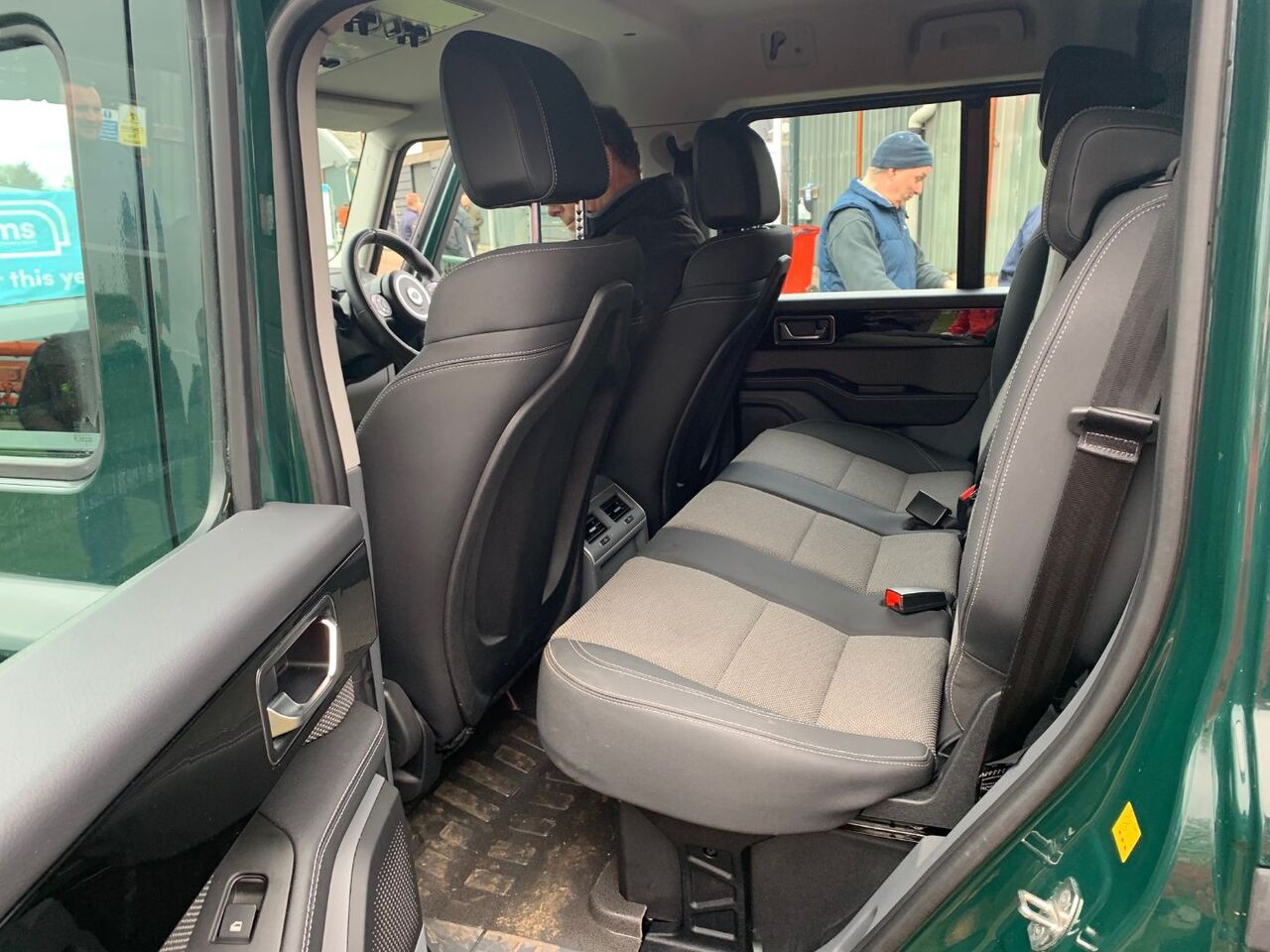 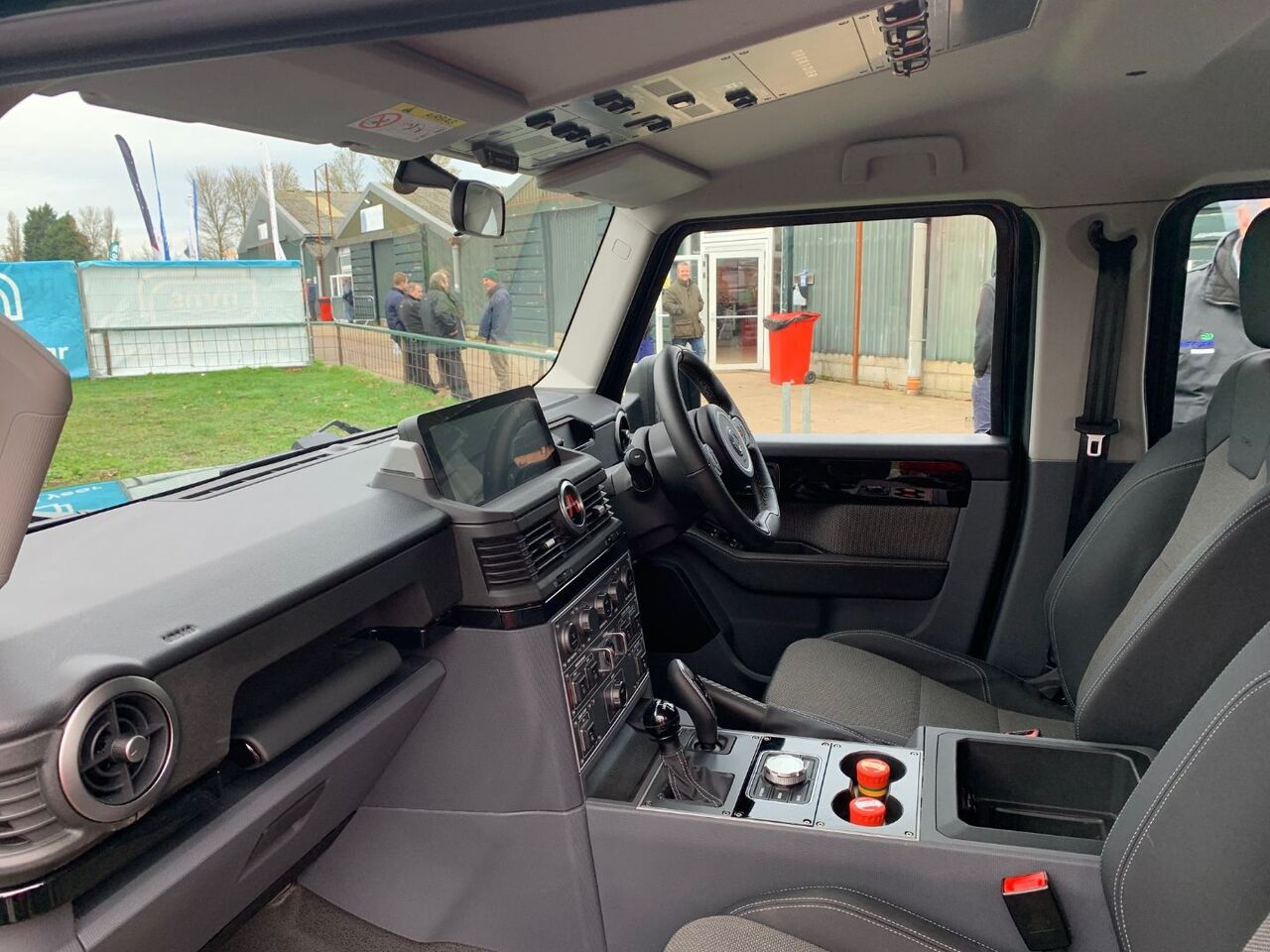 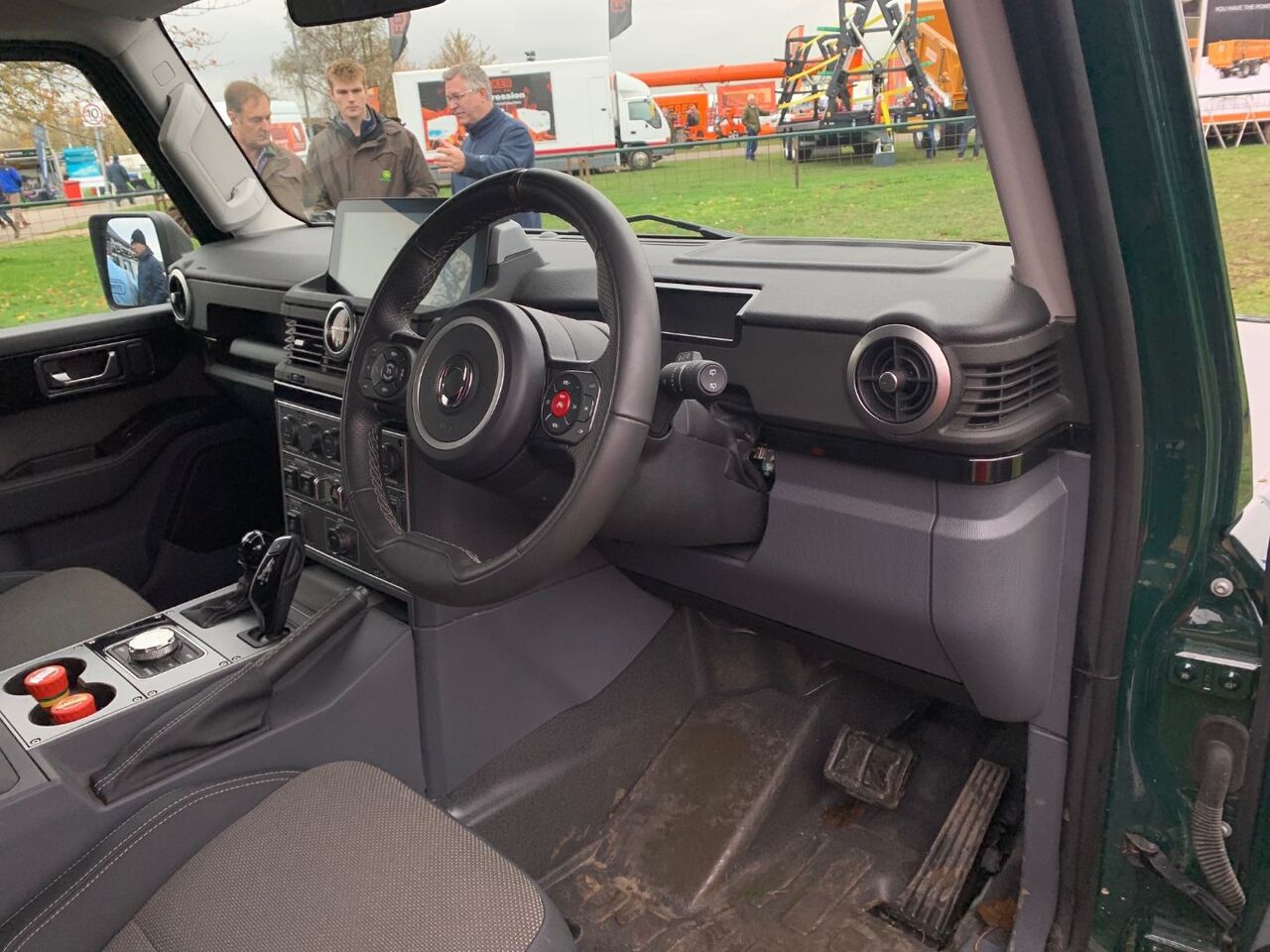 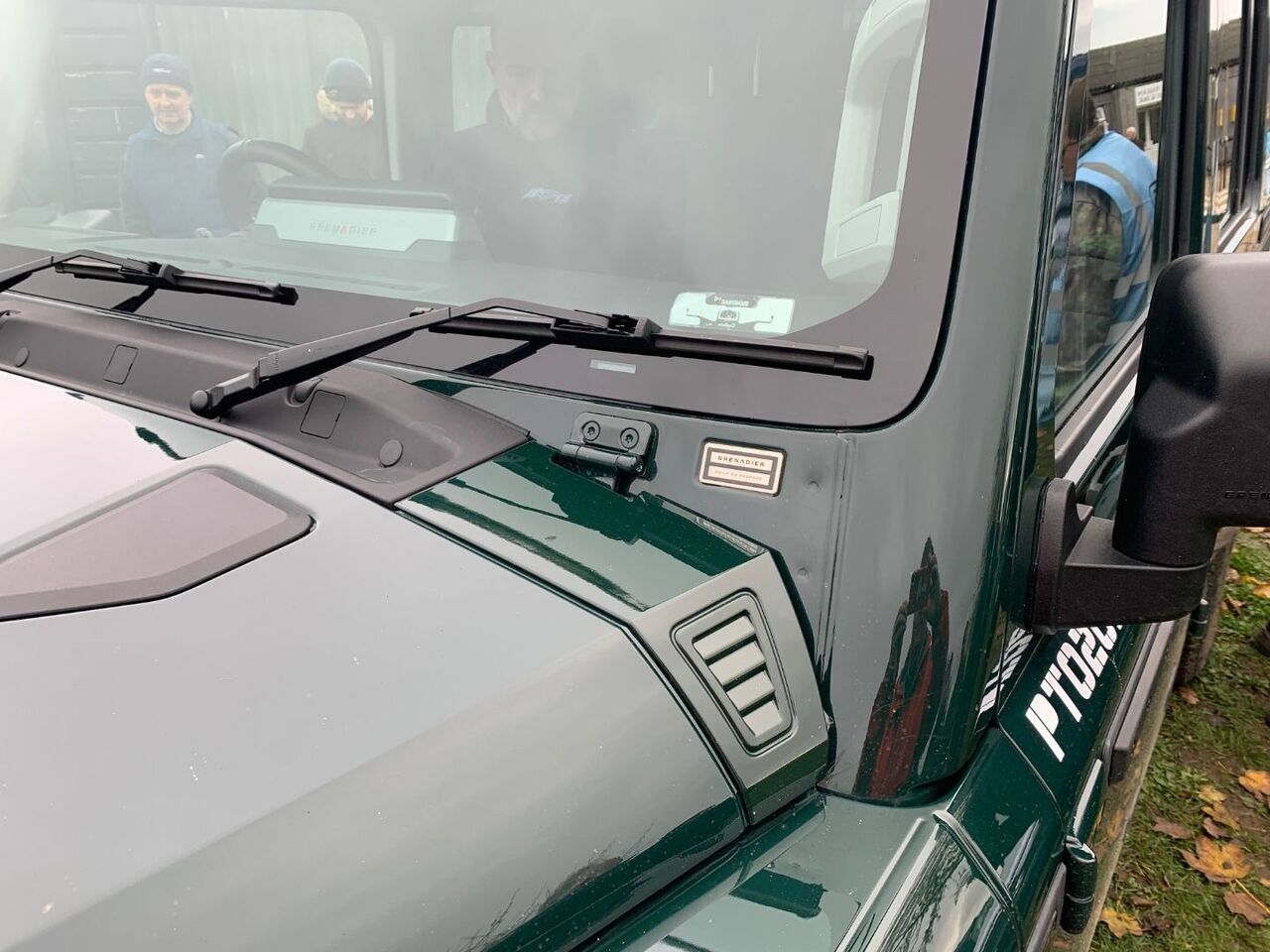 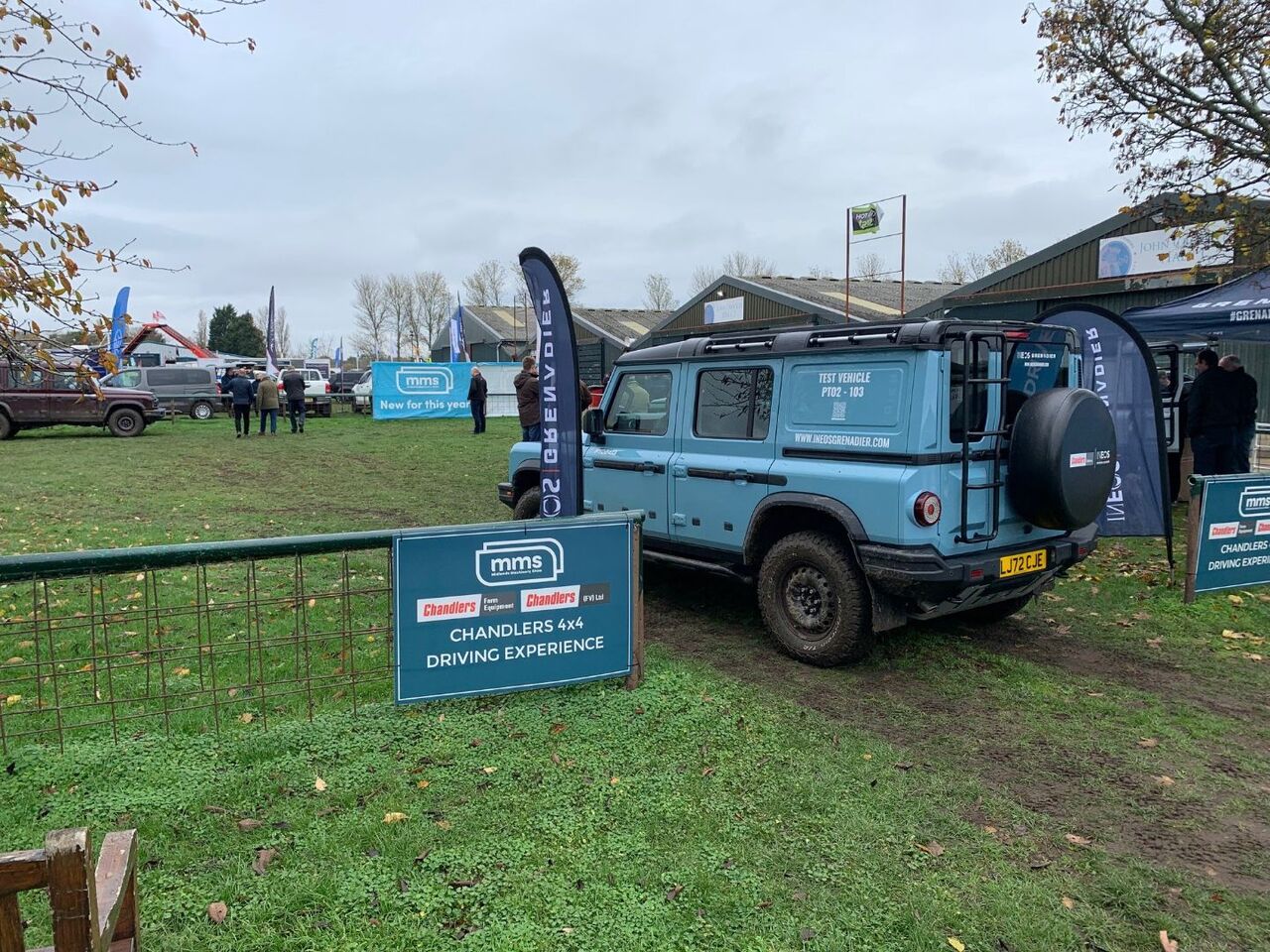 I thought it drove beautifully. The test track was not particularly daunting, wet grass, soft mud and ruts, damaged concrete, but the vehicle was easy to control and modulate the power, (my friend did spin the wheels in places), it was comfortable and even sitting in the back, I was happy to stay a while, (this being the commercial variant, the rear seats are about 6cm closer to the fronts and slightly more upright) . I asked our driver/minder if he had done much road mileage in a Grenadier and he replied he had and found it both comfortable and relaxing. The on-road ride he considered to be well controlled and reassuring, even on the K02 tyres, (the road-biased tyres are quieter).

All in all, a good way to spend a morning. All I need now is a contract to sign!

The test drive days are brilliant and although we'd love to drive on the most daunting of courses, the reality is places like this and Firle place are exactly the conditions most of these cars will drive in. Apart from the ones that will never see mud obviously!

Would like to thank Simon for his welcome from Sandiclife. Also, the team from Chandlers and Ineos, who were happy to chat about all things Ineos.

Also from Steve, the off road expert from Ineos. A really knowledgeable person, who coincidentally served in the Army with my brother 30 odd years ago! The vehicle I drove was Petrol engined and was a pleasure to drive on the OFF ROAD course over an impromptu driving course constructed on the old RAF Winthorpe airfield. The track itself was churned up from the immense amounts of rain we have had. The vehicle had no HDC, or diff locks, but it drove very nicely.

Overall, a big thumbs up and a thank you to all involved. Next process is to take delivery!

Looks a little wet there today 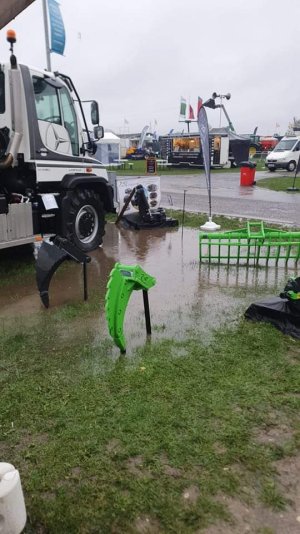 Isn't that a normal day in the UK?

DaveB said:
Isn't that a normal day in the UK?
Click to expand...

Not really, at least we don't have any Crocs and hopefully will I have a Grenadier soon, so anything God throws at us, we will overcome it.......

I hear that Sir Jim is building an Ark. Each colour IG has to go in two by two. Bad news is its hydrogen powered and creates water - bugger!

Nomad said:
Not really, at least we don't have any Crocs and hopefully will I have a Grenadier soon, so anything God throws at us, we will overcome it.......
Click to expand...

Last few years in Australia we have alternated between massive floods and huge bushfires.
Luckily it is a bright blue morning today

DaveB said:
Last few years in Australia we have alternated between massive floods and huge bushfires.
Luckily it is a bright blue morning today
Click to expand...

But some heavy flooding in NSW right now, or did I missread the paper?

bemax said:
But some heavy flooding in NSW right now, or did I missread the paper?
Click to expand... 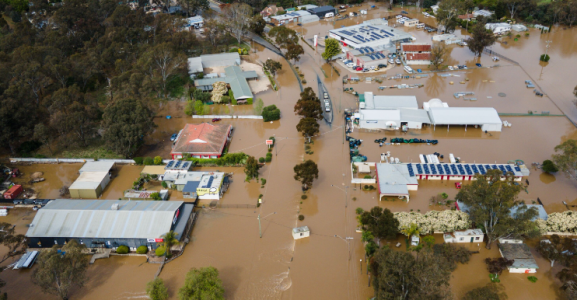 You must log in or register to reply here.

My Test Drive Today In Aufenau
2 3